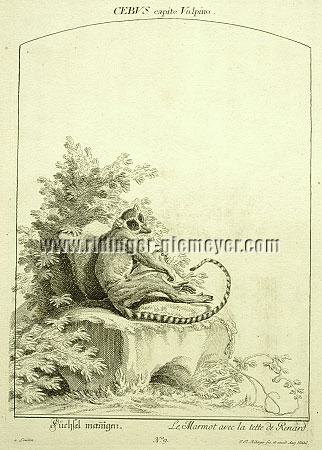 Sheet 9 of the set of Ten Plates Monkeys or Animals yet related to them published without title sheet, “destined to be colored and to follow Ridinger’s large work”,

Thienemann’s further remark that the plates had been “reduced later … and incorporated slightly modified (partly with respect to the caption, too) into the colored plates” not correct and presumably just superficially based on the equal number of 10 plates each. Actually in the Colored Animal Kingdom, not completed anymore by the father himself, the depictions themselves are considerably smaller to provide more space for the caption, while the plates are of almost the same size. Where with the exception of the Lion Long-tailed Monkey (Th. 548 and 1088 resp.) repeated in almost unmodified position, Martin Elias as engraver of nine of the ten plates took over numerous, but by no means all animals of the set of the monkeys, partly in similar, yet distinctly modified position, partly in entirely new compilations, as well as adding previously not considered species. Present ring-tailed lemur then almost unchanged, but now before the boulder, with another, smaller guenon (Th. 1093).