of the Boar Sheet of the Imperial Stag-Boar Pendants Th. 67/68
— “ The Largest and supposedly finest , too ,
Ridinger has supplied ” —
as Ultimate Representation of a Hunting-Historical Zenith

Ridinger, Johann Elias (Ulm 1698 – Augsburg 1767). How the Wild Boar is hunted and dealt the coup de grâce. – Qua Ratione Aper exagitatus tandem Prosternatur. Seized by the hounds on all sides, but also surrounded by several undone, the tusker is at bay by the foot of a mighty oak and receives the coup de grâce with the boar spear from the lord of the hunt. On the left several hunters, holding the horse and further hounds, coming from the right two hunters and grooms each, two of which with boar spears, too. Etching with engraving. Inscribed: Johann Elias Ridinger inven. fecit et excud. Aug. Vind., otherwise in German & Latin as above. 20⅞ × 29¼ in (53 × 74.2 cm). 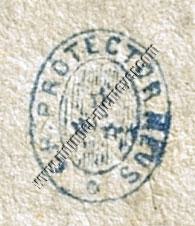 Their oval blue collection stamp (⅜×¼ in [10×8 mm]) verso
with the three medlar flowers borrowed from the crest of the house
and the device
CH(RISTUS). PROTECTOR MEUS
(Lugt 567)

“ The House of Arenberg always distinguished itself by … strict piety, great lenience towards the subjects, and a liberal patronization of the arts. The palace at Brussels holds

In the eldest line dating back to the 12th century with Arenberg (Aremberg) in the district Adenau/Ahr as ancestral seat, substantial possessions on the Lower Rhine, in Westphalia and the Habsburg Netherlands and here in particular the part of today’s Belgium were acquired chiefly by marriage and inheritance with a consequential shift of interests.

From its gigantic print collection fed again and again by new generations 40000 (sic!) sheet in 669 lots were sold at auction in London in 1902. For the by far larger part split among English, American, and German trade, the part captured by the house of Gutekunst in Stuttgart staged a separate sale the other year. Remaining parts were sold into London trade after World War I and New York trade in the 1950s.

On heavy laid paper supposedly watermarked Wangen and secondary mark FAvI (?). – Three sides with 8-15 mm wide white paper margin in addition to the platemark of c. 1 cm. Only on the left trimmed to the platemark with partially still fine paper margin. The left lower corner and right white margin a little crease-marked. Besides in the latter and in the middle of the caption one professionally done tear each. A former centerfold utterly smoothed out and perceptible as a faint shadow on the back only. However, in respect of the faults of preservation to be stated almost always with these oversizes, these downright minimal age marks are entirely subordinate to the excellent printing quality with its marvelous chiaroscuro as adequate to what made

so unrivaled and unrepeated:

“ The worthy pendant to the one before , equally rich and well-done. ”

Of which therefore holds true what Thienemann already stated on the deer sheet:

Most strikingly the various states of the many hounds …

Each part of this magnificent , wild group executed excellently ,

so that one cannot admire this masterpiece enough. ”

However, as dramatic scene and landscape – for Welisch (1904) Ridinger was indisputably “the most important Augsburg landscapist of this period, albeit he is mainly known as animal painter” –

of this splendid composition, too, which together with the Par Force Hunt of the Stag – Th. 67 – forms the group of the Imperials as Ridinger’s largest sheets and the plates of which were, contrary to Thienemann’s presumption (1856), not lost, but are available here, too.

What by the way has to be amended to the effect that several mezzotints worked by or for Johann Andreas Pfeffel after paintings from supposedly Ridinger’s early years – here available in quite uniform even deep velvety qualities the 4-sheet set Roe-Boar-Bear-Quail of the C. F. G. R. Schwerdt Collection otherwise unbeknownst to all but Thienemann – are of similar size and Schwerdt III, 149 in addition records as what has to be described as practically a unique here not provable anymore since 1939 a St. Hubert after Johann Caspar Sing (Braunau/Inn 1651 – Munich 1729), with 33½ × 24⅜ in (85 × 61.8 cm) surpassing those once more. Showing “only” Ridinger’s “excudit” as publisher, it should be a genuine work of his nonetheless. However, with 29¾ × 36⅛ in (75.5 × 91.8 cm) sheet size here actually the most monumental sheet of the œuvre, albeit still engraved by third party, is the early Siege and Conquest of Halicarnassus (Th. 917) from the Alexander cycle.

Already 1857 Weigel could provide only late impressions of the Imperials within his immense inventory partly based on the Ridinger estate and in the Coppenrath Collection sold at auction 1889 they were missing just as in the Fine Collection of Drawings and Engravings of Joh. El. Ridinger’s from the Estate of a Known Collector sold at Wawra’s in Vienna 1890 in 421 partly many-leafed lots. Finally, the ones Helbing offered 1900 were slightly repaired.

“ Stylistically they should have been created in the late forties ”

Whereby they are from that period when in Darmstadt Landgrave Louis VIII, “the greatest nimrod of his time” (Hofmann, Führer durch das Darmstädter Jagdmuseum Schloß Kranichstein), ruled (1738-1768) to whose court the Ridingers had a longstanding close contact at that time by the person of court hunt painter Georg Adam Eger as not only reflected by Martin Elias’s etchings after Eger, but by the at least 12 sheets, too, generally dedicated to Louis’ hunting success with what these lead the group of sheets attributed by name. As otherwise works by Johann Elias Ridinger are known painted over minutely in oil and in the court colors by or close to Eger (offer for such ones per 28,968 f.).

A RIDINGER ABSOLUTUM , A SUN AMONGST HER PLANETS .