Ridinger, Johann Jacob (? 1736 Augsburg 1784). Many Lynxes are the Deer’s Death. 13 of the latter, of which two are attacked by three and one lynx resp. All others in wild flight. Throughout leafy precipitous rock scenery with water in the foreground, in which already are six – two royal – deer, one of them landed on his back when jumping from above. A further royal one still leaping. Above the group a second one of two stags and hinds each, of which one of the former bringing up the rear with sovereign leap. Center left, however, the dominance of a rearing royal one with abnormal antlers with a lynx on his back seizing his neck, a second one clinging to his belly, and a third one pouncing from the right, while left of this group a further royal one flies into the center of the typhoon, with a fourth lynx jumped onto his rear. Edged pen and ink drawing with wash in black (outline) and grey-brown on chamois-colored strong vélin. 12¾ × 19⅜ in (323 × 493 mm).

Niemeyer, Ridinger Erlebnisse 1698-2020, 2021, pp. 186-188 with color ill. & 288 f. as double full-page color plate. – Verso lower right cipher by a presumed previous owner in pencil, legible only the “G:” of the forename, not the longer surname and a second line half-covered by surrounding narrow edge strip from former mounting onto framing board. – Both a 3.5 cm long tear in the right upper corner and a further small one in the sky part as done as the small corner completion lower right. – Verso unessentially fox and age spotted.

With regard to the content it is the most varied, now direct, now indirect picture elements of Ridinger’s, lead by the reared royal one attacked by the lynxes à la Th. 1144, see below, yet also reminding of the somersaulting ibex of Th. 363, whose lynx jumping up below him is the one on the right here. And for the overflying deer its American species Th. 1009 (“Rid. fec.”) could have acted as model, drawn by Johann Elias, engraving remaining open. The heavy deer below center arisen from Th. 260/1741, the one right of this Th. 266/1742.

whose recent passing on prominent auction stage as Johann Elias Ridinger is precluded a priori due to the paper, nevertheless stands in close context to this. That is to the impressively rich

of the Ridinger appendix of Johann Elias Ridinger’s Art Estate in Drawings within the 1869 “Catalog of a Collection of Original Drawings … established and bequeathed by J. A. G. Weigel (1773-1846) in Leipsic” and there positioned within the deer/roe section as following:

And supplementing from Coppenrath Collection II (1889) the items there

Obviously all of more or less equally large mostly oblong size, with 1745-47 the dates reveal for their creation a thematically as chronologically tight scope of three years the most. Which raises the question what lynxed the master then that much, whether he pursued a particular, yet, as documented here already by means of drawings for the mating call, not realized independent lynx-stag project. Mostly signed, they refer to Johann Elias himself. What precludes studies by the growing up eldest, Martin Elias, by means of his father’s set pieces since at least present work consists of such throughout. To what extent the works from the mid-40s in this regard actually represent new groups and by this a mine for future works – as for instance for the drawing to aforesaid lynx-ibex composition of Th. 363 according to Schwarz to be set with 1752/53 – requires further research, going the extra mile.

Going the extra mile indeed with regard to above (165) Albertina drawing of the same year with its counterproof copy with now wolves instead of lynxes. Of the same compositional pattern, albeit less finished and therefore the verve of the event not increased to ultimate pictoriality. By size incidentally even 4 cm wider.

As regarding the mid-40s, being on vélin (machine-made paper without lines) for present work the father’s hand is out of the question. Invented in England about 1750, productionwise this came to the continent (France) only in 1779 and in 1783 to Germany. Yet in analogy to the Dutch papers Johann Elias favored for the colored works as according to his own testimony “the most decent and finest for this purpose”, outside of the hitherto proven graphical works also for Johann Jacob a grasp abroad for spectacular new paper generally the less excludable for the late period as already Johann Elias in his mid-20s had established himself by a Stag Hunt as according to Wend the “supposedly earliest German mezzotint in colors” as technical forerunner, too.

Nonetheless, with the four wooded landscapes known from literature only, in the case of the unmarked one laid before here the significance of the paper still prevailed in the negative. What might easily have included the now present lynx-deer drawing, were there not … 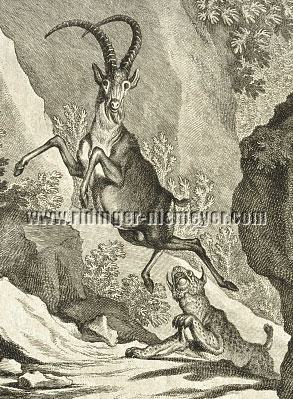 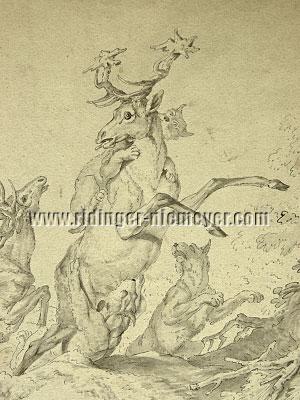 Were there not Th. 1144 with especially the significant specific of the royal rearing up with the one lynx by the neck and the other at the belly, see above. And if the transfer of the father’s design into the copper were not indeed by … Johann Jacob!

By which his occupation with that curious group from the mid-40s becomes obvious. Should the creation of the print fall into the time after the father’s decease, at which Johann Jacob was 31, it would fall into the period of general working off of the paternal bequest by the sons. As not least the lynx-ibex variant called on above from the set of the Incidents concluded only 1779.

And so the weighting of the current facts induces Johann Jacob as the creator of present drawing. And as the most obvious one at that. For more conceivable than that of all things one of the most varied Ridinger copyists of the first half of the 19th century should have practiced himself by the dominant of a lynx-deer subject not made use of to the overview here. 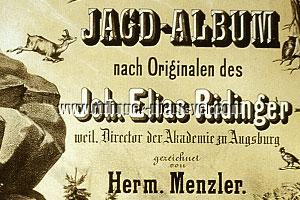 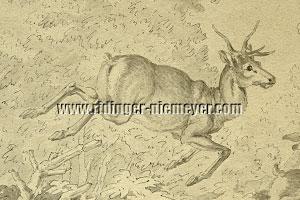 At least we encounter a chamois leaping through the air in analogy to the stag here above center on the as fine as rare title plate to Hermann Menzler’s lithographic Ridinger Hunting Album from 1863/65, see its illustration page 85 of aforesaid 1998 Ridinger Event Catalog here. But the lynx he dealt with in relation to a bull after Th. 303, which sequence of events also the lynx-ibex fight of Th. 364 follows, thus utterly contrary to his prevailing over the deer here.

For their lynx experience, however, Johann Jacob could resort to aforesaid impressive passage of paternal designs. With each work a variant. And with present one as a further one. And besides with 13 as the most deer. And just to this scenery he devoted Th. 1144 as a large, ambitious sheet. After indeed paternal design. Nevertheless the appreciation follows the sheet as such. 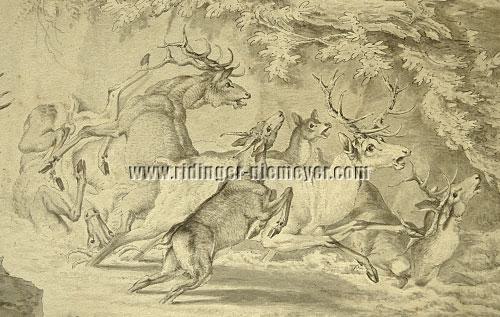 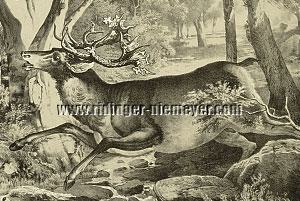 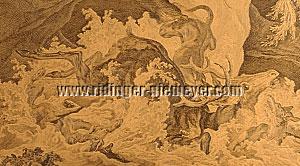 Presented vibrantly fresh as usual. With fascinating verve. As a start into posthumous fame.