Here then in two Painterly Drawings

(To Stalk the Stag with the Hollow Pot.)
On the right the ten-point steps out between two rocks answering the supposed rival. On the left behind a tree the hunter in firing position kneeling on stones and propped. At the foot of the tree in the underwood and thus in the centre his assistant calling in the hollow pot and in doing so keeping the stag also in the look. Rich wooded scenery, in front right a pool with reeds. Pen and brown ink and wash. C. 1758. 8⅜ × 14 in (214 × 357 mm). 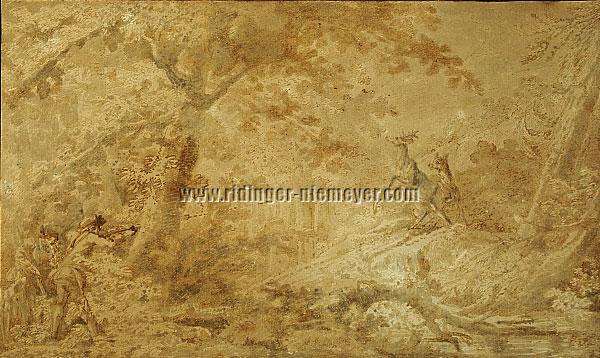 (To Whistle the Roe! or How the Roes are shot on the Call.)
On the right at the beginning of a sloping course the roebuck making the death-bound, the doe behind it looking up surprisedly. On the left within the thicket under a tree the hunter along with the baiting assistant still pointing the gun with outlined line of fire. Wooded scenery, in front right below the roes a water with a dead tree-trunk sunk in. Pen and brown ink and wash. On the caption mounted on verso inscribed in brown pen: Johan(n) Elias Ridinger inv. et del: 1758 —., otherwise in German as above and below. 8⅜ × 14¼ in (214 × 361 mm).

Drawing not executed in copper

although in regard of the pure image size remaining behind the oblong format of which, namely c. 5 cm in the height and c. 4 cm in the width. The second drawing though like those with 6-line explanation (in German) of the procedure, too, mounted on the back:

“ (One takes the outer bark from birches, makes thereon a call of two voices like the doe when it is alarmed for its fawns, but the call must be right far off and pure. Now when in such a place where the roebucks stay in oneself lies in wait, so the latter will appear shortly, especially if the roebuck does not have a doe with it. But the hunter must get very ready for shot for they turn about quickly and abscond if they notice the merest or get wind so that it is need that one take the shooting stand below the wind. For the call could taken also leaves of apple, beech, and pear, but the bark of the birch is the best.) ”

Irrespective of the thematic nearness to the Princes’ Hunting Pleasure worked about 30 years before, the two drawings obviously not belonged to the extremely extensive bequest of c. 1849 drawings J. A. G. Weigel in Leipsic took over in 1830 and enlarged in the following time. Compare hereto both Thienemann pp. 271 ff. and Weigel’s 1869 Catalogue of the Bequeathed Collection of Drawings, pp. 181-231. But neither provable, too, within other renown collections of drawings.

So the fully executed works here obviously were handed over still by Ridinger himself or soon after him. This not least – see below – based on a remarkable presentation. 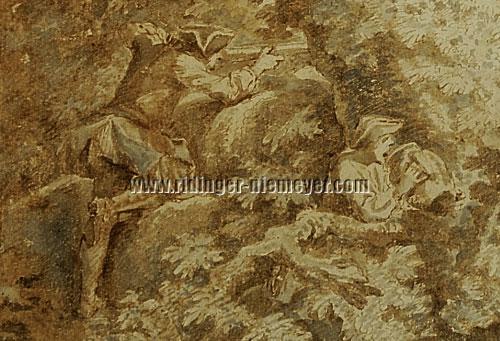 Detail: One hunter calls into the hollow pot, the other aims

Conceivable besides their purpose for a series, not brought to an end, of hunting by bait analogous to the Ways to trap the Wild Animals of 1750. So a further hollow pot in upright format in a Bavarian collection unknown in the graphic œuvre, too.

Such sets of different extent not at all unknown within Ridinger’s drawings and mostly to be proven by same dates, partly even serial numbering, but generally by similar size and same outward creation each time.

It shall be reminded in this connection of the small set Th. 269-271 + 281 within the engraved Most Wondrous Deer. In respect of their size and arrangement of the figures, also their several frame lines and rounded upper border they form a group for themselves departing from the general picture scheme there as already censured by Thienemann and correspondingly considered in the new editions since Engelbrecht.

Finally relating to Ridinger’s intention explained within his preface to the Princes’ Hunting Pleasure “to show all kinds and manners of hunting … also the track or trace of every game … thus to strive for giving this work a right perfection” that 36-sheet set, so highly important regarding the practice of hunting, at least remained a torso. For only in the course of decades he kept his promise by sets totally differently produced: (Thorough Description and Presentation of the Wild Animals, with the small traces, 1733; Representation of the Fair Game, with the large traces, 1740; Ways to trap the Wild Animals of 1750, and the Falconers set). The latter two – and all the more Par force Hunt and The Fair Game hounded by the Different Kinds of Hounds – to mention already only just a bit because their subject, although not exhaustively, is depicted already in the Princes’ Hunting Pleasure.

the exceedingly charming hunt with the mating call ,

Trimmed at the fine borderline in brown ink and, possibly throughout already contemporarily, mounted by old on laid paper with border washed in green and edged by fine lines in brown ink. The drawing additionally lined by a slender streak of gilt paper. The whole mounted anew on laid paper laminated repeatedly which margin has been washed in black. The signature of the roe sheet simply mounted on the back – top left at the edge of the paper, thus originally left directly below the lining – with caption equally lined with the addition of a further black and the omission of the gilt lining. If originally a signature along with caption was present or if for the purpose of optical adaptation this had been cut off and mounted on the back of the roe sheet since the Stag’s Call remained without such one must remain open. In case of the drawings Ridinger handled this quite varyingly. In the lining of the roe sheet three wormholes coming from back. A tender other one only in front and here in the image centre noticeable only a little. An even browness caused by mounting – even for the roe, the stag especially in the wooded area left – affecting the impression of the images less than giving them rather a very fine authentic patina. Shortly,

for Ridinger almost unique of together optical splendor .