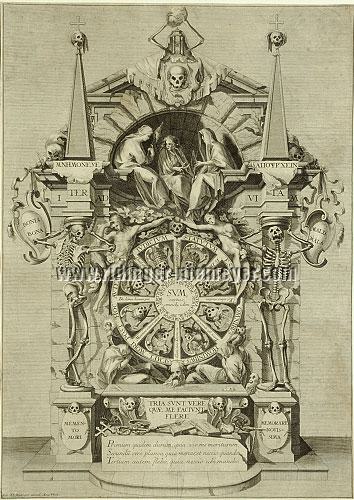 Unknown to the relevant literature

on Ridinger up to Ergänzungen zu den Œuvreverzeichnissen der Druckgrafik (1975), Niemeyer, Die Vanitas-Symbolik bei Joh. El. Ridinger (in L’Art Macabre, vol. 2, 2001) and the authoritative catalogs of collections, sales, and exhibitions from Weigel (1838) till the present except for the torso with formerly Count Radulf of Castell-Rüdenhausen trimmed with significant loss of image. Thematically, however,

in its iconographic wealth unrivalled

by the core of his partly extremely rare, yet indeed still known mementi, the mezzotints Th.-Stillfried 1426-1431. And compositionally far from the latter two of these, the brutally realistic ones worked by Johann Jacob after Dieffenbrunner (1430 f.). Here then

the Memento Mori as piece of virtuosity ,

as intellectual challenge combined with an expressive-charming plasticity.

By its size visibly larger

This extreme rareness of Andreani’s print

“ his work is to be valued as historically and art-historically significant today” as Nagler, Monogrammisten I, 86, stated already in 1858: “… the extraordinary activity of a man … about whom was often judged too severely since Bartsch … Andreani has to be looked at from a different viewpoint …“ and in the same place per 1017: “the famous form cutter” ),

of which a major part falls into the time after 1600 though when he was active in Mantua as dealer and publisher only, nonetheless furnishing acquired blocks of other artists with his monogram. Yet two works from 1608 and 1610 resp. are considered as original again. Bartsch’s principle stock of 25 plus the two aforesaid later ones supposedly still current (cat. Lugt, 2010: 25). Unaffected by this yet his 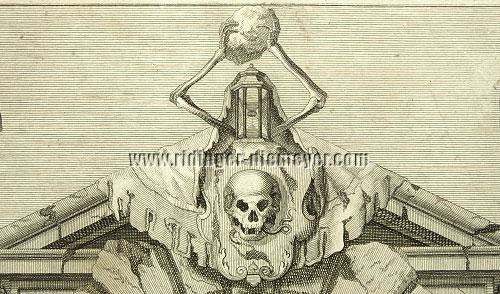 symbolized by means of an architectural façade, read by Achim Gnann (ALBERTINA Coll. Online, 2013) as “in the manner of a sepulchral monument”, identified in Moreau’s version, see below, as arch of triumph. With a death’s head mounted sculpturally in conjunction with a canopy onto an escutcheon, through the jaws of which a snake coils as here “embodiment of sin and death” (Riese, see below, p. 371), as head piece below an hourglass from which two skeleton arms reach upwards, holding a heavy rock to hurl, as documented by literature taken from Hans Holbein’s II Arms of Death of the Dance Macabre set of c. 1525. Below in a rotunda the three fates. On both sides each obelisk with Greek caption – ΜΝΗΜΟΝΕΥΕ ΑΠΟΨΥΧΕΙΝ / Remember you have to die – and variedly acting death’s head below the cross at the top and two likewise varying skulls by the pedestal. On the square stones below, supported partly by two skeletons in place of columns, ITER AD VITAM / Way to Life.

On both sides beyond these skeletons escutcheons hanging down with the inscription BONIS BONA (Good Things to the Good) and MALIS MALA (Bad Things to the Bad) resp. Inwards the friends flank the

Wheel of Death , of Fortune , of Lifetime

placed immediately below the three fates spinning the thread of life. Joining in the hub, its eight spokes labeled on-topic, with each closing word missing the suffix mus:

Its completion is provided with Andreani — not with Ridinger! — and with the former also only in the 2nd, final state, see below, by Death sitting athwart on the hub, holding in his right a platelet with indeed the missing suffix MUS.

“ This arch is meant to be attached to the empty space in the center of the façade (in the 1st Andreani state), in such a manner that it can be turned around its pivot. By this the syllable mus supplements the eight different inscriptions, which in shape of just as many beams (sic, that is spokes) unite in the center ”

And in this regard now

for what reason soever. For that he should have missed the requirement of the mus, can be ruled out. Even more so as he replaces death & platelet on the wheel hub by independent inscription: running around in two lines by the edge

and as central inscription

SVM as at once mirror-inverted MVS !

“ Ridinger deviates from (Andreani’s) master most notably in one significant detail, which doubtlessly intends a reinterpretation of the content.

Also with Ridinger the most remarkable element of the composition is the wheel ,

yet the engraver replaces the centrally mounted dial with death and the suffix ‘MUS’ … by his own epigram and the palindrome ‘SUM’.

This congenial and idiosyncratic modification

recourses and enlarges Andreani’s iconography a la fois, and opens to the intellectual addressee several possibilities for interpretation and reflection.

Iconographically a challenge , present sheet is

Between the spokes the eightfold death. Representing above the clergy, below profanity. Inscribed running around STATVTVM EST OMNIBVS HOMINIBVS SEMEL MORI POST HOC AVTEM IVDICIVM / All men are destined to die and then the Day of Judgement expects them.

Embedded in foliage, see on this below with Moreau, sitting on both sides of the upper part of the wheel on the left Adam, on the right, with a yearning look while her left caresses her right breast in suggestive temptation, Eve offering the apple as the foundation of death. Adam, not looking at her, extends his left to her. The hands of both meet over a death’s head.

the scenic event as such.

Both deaths push their bony elbows into the sides of the human couple. Of which Eve takes no notice. Correspondingly posture of the head & facial expression of her Goodman:

His pendant, however, talks to Adam man to man. Correspondingly thoughtful this with bowed head, additionally holding the right to his forehead in cogitation.

Below the wheel and at once above an open coffin with a deceased — indifferent with Andreani & Ridinger, with Moreau, see below, supposedly rather nun than monk; Gnann, see above, believes him to be a high clergyman — with cross in the hands the winged head of Father Time, that is Cronus as “Representation of the all-devouring time” (Riese, see below, p. 251), flanked on both sides by two large mourners above which are set on the left the head of a harp in gloriole, on the right an owl. The latter

“ In Egypt and India believed to be the bird of the dead, in antiquity it symbolized wisdom and was sacred to Athena. In Christian symbolism it is symbol of spiritual darkness, but also symbol of religious knowledge ” 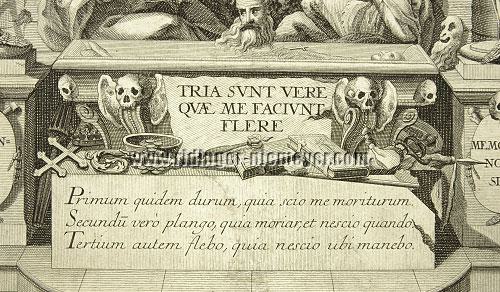 Right of the head end of the coffin the mask of a bearded old man. Before and below the coffin first a large cloth inscribed TRIA SVNT VERE QUAE ME FACIVNT FLERE / There are truly three things which make me weep:

This inscription flanked by symbolized winged death, two small death’s heads at the bottom of the coffin as well as religious and profane (rapier & lance point) attributes of transitoriness along with two closed folios as connecting links. The rapier on elliptic bolster with probably monogram RH(A?)O(D?). Far outside on the pedestals of the two skeletons two little deaths standing, holding an oval tablet each: MEMENTO MORI & MEMORARE NOVISSIMA. The masonry by the way interspersed with signs of its transience.

If Andreani’s so-called “Melancholy”, the woman meditating over a death’s head, is qualified as “artistically a main plate” with the addition “thematically extraordinary”, how much more so his “Allegory of Death” picked up here by Ridinger as a

As – Thieme-B. refer to “the great rarity of the sheets” –

exceedingly rare for Andreani and an almost unique for Ridinger

who generally follows the former with the significant aforesaid exception of the wheel’s center. Conspicuously omitted, too, yet the two genii of death with their reversed torches on the slopes of the gable on both sides of the rock-hurling Death, the obelisks without ornaments. 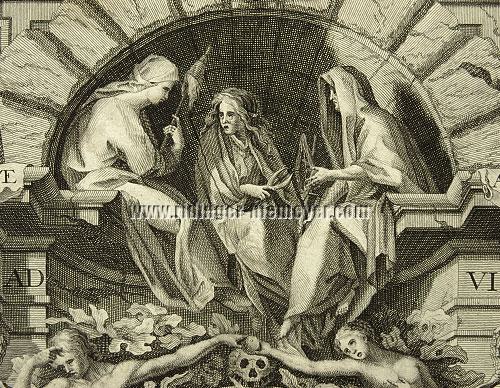 Here then present in overall excellent copy with wordmark watermark (presumably WANGEN) with fine margin running around the edge of the subject. Only here and there trimmed closely to this. The general certain marks of age countered by professional restorative means, as also the (water) blotchiness on the back shows through only partially quite faintly in the subject. In the hatched margin field lower right still faintly visible reference to the artist. In short,

where the latter, added rich lateral text aside, relocated essential accessories in an interesting way. So from the 2nd Andreani state Death sitting athwart in the center of the wheel himself to the top as rock-hurler in exchange for the hourglass there with its skeleton arms stemming the boulder and death’s head of the blazon, while the latter now rules the here, too, rounded center. This, however, not as wheel, rather – and this then the independent development – shaped from the branches of a complete Tree of Life, the top foliage of which being but a weakly motivated filler with Andreani/Florimi/Ridinger. And on both sides of the trunk hourglass and wheel with only seven spokes free of text and image. Dispensing with the mourners and Father Time, the dead person in full figure right below, with the head immediately below the right-hand wheel and thus reminding of St. Catherine. Laid besides without coffin on a drape falling far down as a symbol of mystery, divided by large cross with fourfold skull and sparser divine/profane attributes adjoining on both sides. The finish is a caption in four columns. – For above comparative illustration of the Moreau copy thanks goes to © Cabinet d’arts graphiques des Musées d’art et d’histoire, Genève, No d’inventaire: E 2011-0223.

for which 14 ( sic! ) competitors scuffled! Afterwards the custodian of an important public collection: “So it was you who snatched the sheet from us.

Congratulations. I would have acquired it with pleasure, too. ”

For above comparative illustration of the Moreau copy thanks goes to
© Cabinet d’arts graphiques des Musées d’art et d’histoire, Genève, No d’inventaire: E 2011-0223

“ Thank you for your lovely message which I will read at leisure over the Christmas holidays. I am retiring from the … after 32 years of service. I have been so fortunate to work with a fabulous collection, wonderful colleagues and such knowledgeable antiquarian booksellers like you who have made my job challenging, simulating … and such fun … Please accept my best wishes for a merry Christmas and a happy and healthy 2018! Warm regards ”