« Elias Riedinger (…) has been one of the greatest draughtsmen of the fair game.
We say draughtsman though he was actually painter,
but his drawings and etched sheets, which he did in abundance,
usually are to be preferred over the paintings,
especially the stags of this master are esteemed … » 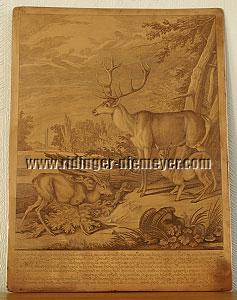 Show-Piece of a Great Rarity of Natural History
This Stag of 14 Points … so a 3 Legger … has been shot in 1748 … by … Landgrave (Louis VIII) of Hesse-Darmstadt / Ditto at Geißlingen in 1739 this fawn depicted with 3 legs … In addition a second calf with crippled forelegs.
The original printing plate for Th. 356

publications of the ridinger gallery niemeyer
&
art-historical lectures and essays