With double full-page separate LOCAL INDEX with privilege of 1735. – From the Vienna Seutter edition of 1736. – Cartouche in black & white. – The Iberian Peninsula including Balearic Islands , Southern France , the Moroccan coast .

Sylva (Silva; Celorico da Beira 1606 – Venecia 1670) “a Portuguese historian, was royal Spanish chronologist” (Jöcher IV [1751], 585 f. with comprehensive index of publications, but without reference to his map), which latter seems to have influenced cartography only posthumously as Tooley (Dictionary of Mapmakers, 1979) records it only tersely and without biography as 1730, while Sylva is still missing entirely in Bonacker (Kartenmacher aller Länder und Zeiten, 1966). Present Seuter map in such a manner of downright virginal earliness. And of prime quality to match. – See the complete description.

on the Landing of Charles III in Spain in 1704 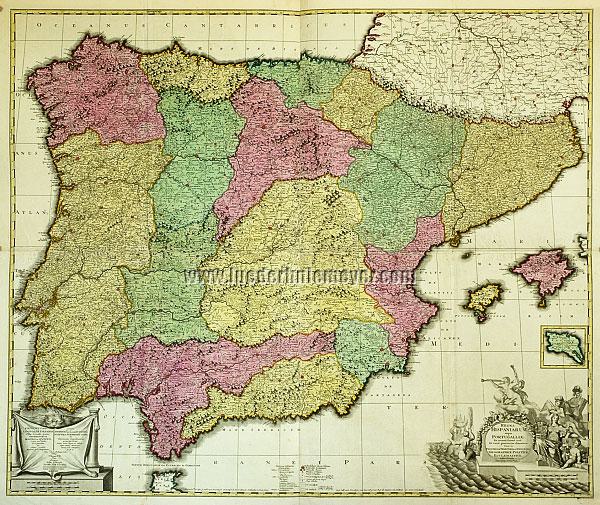 not in the 1971 established noble lists

edited by the British Library

of international Notable Acquisitions and Unusual Items that have come up for Sale resp. in I. M. The only one wall-map of the Iberian Peninsula there the Gastaldi map of 1544; known otherwise a copy of the already mentioned Mortier wall-map of c. 1704-06 traded here into a Rhenish collection and after its reacquisition more than twenty years later immediately into a public library in 1993. Interesting especially as the statements of its cartouches follow those of Valk’s map offered here. In such a manner then not only a

CARTOGRAPHIC RARITY OF THE HIGHEST ORDER

but also thematically with respect to the Spanish War of Succession

in 1704 as the remarkable war year also in regard of other events the prospective Charles VI disembarked first in Lisbon, then in Catalonia, “after he had been proclaimed as Charles III to be King of Spain in Vienna in 1703” (Meyers Konvers.-Lex., 4th ed., vol. IX [1889], p. 518). This event the map dedication follows :

The date also given first – as in context with maps very scarce – as chronogram, then repeated by the fine leap-year reference “Annô hôc intercalari MDCCIIII”.

though the cartouches remained uncolored as widely timely and as it is supported also by the Atlas of the Great Elector. Drawn in and to be mentioned as an early example the road net ( “‘s Heeren ofte Groote Weegen” ).

On heavy paper of perfect freshness and impeccable condition except for a few mostly quite tiny repaired tears in the 3-3,5 cm wide white margins. Centre and three long folds, one of them with a repaired finely little break.

With Balearic Islands , South France up to Marseille and the Strait of Gibraltar together with Ceuta. – Some marks and additions by old hand.

The Basque coast from Dega to Bayonne , the coast of the Mediterranian from Murviedro to Montpellier. With Minorca and the greater part of Majorca. – With road net, canals + harbour places.

The Portuguese-Spanish coast from Aulquia almost to the mouth of the Almoria. To the north up to the Sierra Guadeloupe, southerly comprising the Strait of Gibraltar together with Tanger + Ceuta. – With road net, canals + harbour places.

Worked one Year after the First Edition

of the 1st Part

of the “immortal Work” ,

“ of one of the Intellectual Great Feats of the World” ,

Castile – Castiliæ Veteris et novæ Descriptio Anno 1606. With title-cartouche with the arms of the kingdom of Castile and separate cartouches for miles indicator + meridian, all finely decorated in the ornament style of mannerism. Detail map of Old + New Castile 1 : 1.9 Mio. in colored engraving at the elder Jodocus Hondius in Amsterdam. 1606. Inscribed as before. 14¼ × 19½ in (36.2 × 49.5 cm).

Keuning 111; Koeman 112. – With the historical-geographical back text in Latin with initial C (1⅞ × 1⅞ in [4.8 × 4.9 cm]) in woodcut designed scenically-architecturally with two country-men in front carrying wine on a pole. – Almost untrimmed wide-margined with several minimal and most minimal resp. tears, only one with 3.5 cm in the 6 cm wide lower margin worthy of note, as then also the partly torn centerfold is professionally closed.

with the Spanish capital as center from the MERCATOR ATLAS to which it had been added quite freshly after its change to Hondius in just 1606 and here available from the 1630 edition published by the son Henricus. – Up to the Portuguese border from Badajoz – Braganca – León, then further Burgos – Logrono and along the Rio Ebro with Zaragoza and Tortosa to its mouth . In the south still with the Estremadura and Andalusia with Córdoba as well as Baza and Murcia, it contains, regarding Cervantes, above all

of this brave great man of Spain and the world .

next to Madrid and typographically giving the importance then, over the educational stays Salamanca + Madrid up to

“Valadolid” as native place of the writing of the Don Quixote

as the newly identified starting point in La Mancha.

“ … variety much preferred by the Spaniards

for its Fights , with enormous ruffle ”

Thienemann & Schwarz 986. – IN THE RIDINGERS’ ORIGINAL COLORING from the unnumbered Colored Animal Kingdom created since 1754 and concluded finally posthumously not before 1773 (“Complete copies are next to untraceable”, so Weigel, Art Cat., sect. XXVIII, Ridinger Appendix 63a as merely 120-sheet torso, 1857 ! , but also just individual plates quite rarely on the market only, at niemeyer’s currently the one as the others all the same). – Remaining uncolored contrary to the prospectus, a second edition from the plates shortened even under loss of animals and with modified titling and the Ridinger inscription removed, yet now numbered, was published by Engelbrecht/Herzberg in Augsburg 1824/25. – Thienemann:

of this variety much preferred by the Spaniards

for their fights , with enormous ruffle .”

“ It yet follows … and these are the Spanish bulls, the illustration of which we owe to the kindness of Mr. Hamilton in Vienna.

It is not easy to find a more splendid growth .

These animals also run about freely in the woodlands and become onerous and dangerous for many a traveler when they position themselves in hollow and narrow paths. At certain times they are captured and then

the well-known and famous bull fights

are held with them, in which the Spaniards hold a regular duel with these animals on horseback and on foot in honor of their mistresses, whereat quite many a one has lost his life ”

of the Spanish National Sport

Tempesta, Antonio (Florence 1555 – Rome 1630). Fiestas de Toros. The stations of the bull-fight in the arena as instructive didactic piece. In front as left-hand main group a bull with richly decorated banderilla in the back attacked by a lancer, separated by a barrel from the espada swinging for the coup-de-grâce. Right beside a done torero. Staggered up to the densely populated grand-stand further lancers and two bulls, the foremost kept at distance by the swinging espada by a two-wheeled axle, while a banderillero swings a second baton. The back one, outright bristling with banderillas, one burning, chasing three lancers, one of them still aiming at him. Left of this as center piece richly figured vehicle, camouflaged with head mask with banderillas in the eyes, additionally burning ones in the side holes. Laterally left set back a phalanx of further lancers & toreros. Etching by or for Claes Jansz. Visscher de Jonghe (1586 Amsterdam 1652). (1639.) 3⅞ × 5½ in (9.8 × 14 cm).

The thematically as extremely rare as instructive ,

above all very early scenery , too ,

of chronologically at least great nearness to the culmination of bull-fighting under Philip IV (1605-1665, accession to the throne 1621, see his portrait by Velasquez above)

“ shows … a kind of tank which was used in bull-fighting ”

One of the three sympathetic depictions of urchins in Munich. – As depiction of melons rare.

detail map of Brazil with the 14 captaincies

from the Amazon delta to Santos (Saõ Paulo)

with its own indigenously decorated title-cartouche

LOCAL INDEX for PORTUGAL as well as for BRAZIL

as a very useful, but rare special. – From the Vienna Seutter edition of 1736. – Cartouches uncolored as widely timely and known also from the Mauritius Atlas, the gift of Johann Moritz of Nassau-Siegen, named the Brazilian, for the Great Elector.

In Europe up to Gibraltar – Málaga – Valladolid. – With Portuguese road net. – Of first quality.

Coimbra. General view. At the Mondego River in front horse, boat, and especially pottery trade scenery as characteristic for Portugal’s old capital with its university founded in 1290 as one of the oldest in Europe. Steel engraving. C. 1855. 4½ × 6⅛ in (11.5 × 15.5 cm). – See the complete description.

Thieme-Becker XVIII, 441 + VIII, 473; AKL XXIV (Davis), 505. – The fine portrait of the Braganza queen was engraved as frontispiece for the two-vol. Janssonius-Waesberghe Atlas (“English Atlas”) at Moses Pitt & Stefan Swart together with its pendant of Charles II and as such both mentioned by literature. – Splendid impression of vibrant chiaroscuro. – 2⅛ × ¼ in (5.5 × 0.8 cm) tear out in the upper margin still reaching 2.5 cm into the subject restored professionally and utterly unobtrusively.

The Braganza dynasty ruling in Portugal since the XVth century founded as a result of the Napoleonic interregnum (1807/21) a soon independent line by proclamation of Dom Pedro as Emperor of Brazil which later led to the House of Orléans while the Portuguese House became extinct in 1853, but involving Saxony-Coburg (Pedro V) by marriage. A Portuguese collateral line originating from a palace revolution resided in the Bavarian Heubach. – See the complete description.

Thienemann (“The name Coati is not due to it, also it should not be called cat, for it … has nothing [so not correct, as viverrid it belongs to the feliforms] in common with the cat”) & Schwarz 1065.

from the unnumbered Colored Animal Kingdom created since 1754 and concluded finally posthumously not before 1773 (“Complete copies are next to untraceable”, so Weigel, Art Cat., sect. XXVIII, Ridinger Appendix 63a as merely 120-sheet torso, 1857 ! , but also just individual plates quite rarely on the market only, at niemeyer’s currently the one as the others all the same). – Remaining uncolored contrary to the prospectus, a second edition from the plates shortened even under loss of animals and with modified titling and the Ridinger inscription removed, yet now numbered, was published by Engelbrecht/Herzberg in Augsburg 1824/25.

Final state with the Familia line within the caption slightly moved up after the removal of the “Q. D. S. XXVIII.” as reference to Jacob Theodor Klein’s Quadrupedum Dispositio brevisque Historia Naturalis of 1751 unbeknown to Thienemann.

“ … inhabits the countries of the Atlas Mountains, but is also found in Spain and Southern France, prefers humid, shrub-rich regions … Its coat provides sought after fur. Charles Martel (“Savior of the Christian-Germanic culture … [in the face of the] violent brunt of the Arabs in Spain and Aquitaine”, Meyers Konversations-Lexikon, 4th ed., IX [1889], 511) took many clothes furnished with this fur after the victory over the Saracens in 732 and

instituted an Order of the Genet

whose members were the first princes ”

“as for this purpose it is the most decent and best”. – Margins on three sides 1.8-3 cm, below 5.1 cm wide. – Some also a little larger brown spots in the white text field.

“ Thanks for shipping the print. It has arrived here in excellent shape. Happy holidays ”